Fulfillment and Distribution > Blog > Container Transloading: What You Need to Know

Container Transloading: What You Need to Know 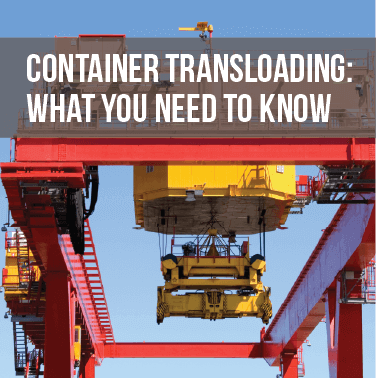 Shippers looking to move large shipments of loose or oddly-shaped cargo often turn to container transloading to get the job done. This approach is specifically effective for shipments that move overseas or over long distances to multiple destinations.

Container transloading gives shippers the ability to better manage their inventory, transport additional cargo, reduce costs and increase supply chain efficiency. Transload containers are commonly used for overseas shipments but can be used for transloading between truck and rail as well.

Our guide below outlines the specifics of what container transloading is, when it should be used, and more.

What are Transload Containers?

A transload container is simply a shipping container that is loaded with cargo and put onto a boat, truck, or rail car for transport. Once it reaches a transload facility, goods from the container are unloaded and either placed into a new container or straight onto another form of transportation for the next leg of the delivery.

Transload containers are primarily associated with overseas transport and huge cargo ships, but container transloading can also occur between truck and rail. Transloading requires that a combination of at least two forms of transportation are used throughout the process. However, ships, trucks and rail cars are all used to haul shipping containers.

Shipping containers are typically made of corrugated steel with plywood flooring and double doors affixed to one side. While containers are universally measured in twenty-foot equivalent units (TEUs), they can generally be divided into domestic and maritime containers. Both of these types come in specific shapes and sizes.

When it comes to overseas shipping, fitting as many containers on board as possible is a priority.

As a result, maritime, or international containers, have some standard dimensions. These dimensions include:

These units can typically be stacked up to 10 high.

Domestic containers, on the other hand, which are only used in North America, and primarily in the U.S., have slightly different standard dimensions:

Containers that are within the dimensions listed above are typically used for transport on road and rail.

Is Container Transloading Different than Intermodal? 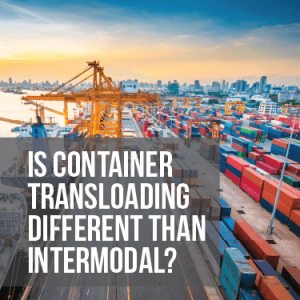 Transloading is the process of transferring a shipment from one mode of transportation to another, typically with minimal handling involved. When transloading services are performed, goods are unloaded from their original containers and transferred into a new one before being loaded onto a new form of transportation for the next leg of the journey.

Both transloading and intermodal are services used when one form of transportation won’t be enough to get the goods to their final destination. The two strategies are also used when it would be more efficient or cost-effective to move the goods using multiple forms of transportation.

Why Use Container Transloading?

The rise of international trade and eCommerce has led to increased use of both transloading services and containerized shipping. Shipping containers are among the best options available for moving large amounts of freight, especially overseas. Additionally, transloading doesn’t require a specific container to be used and is seen as both a way to lower costs and increase efficiency.

By using container transloading, shippers are able to load as much loose cargo or oddly-shaped items as can fit into a shipping container. At that point, the cargo is shipped overseas or across the country using multiple forms of transportation to get the job done.

There are many reasons why shippers would be inclined to use container transloading, from cost savings to inventory management. Some of the most common reasons are listed below.

There are many reasons to choose container transloading, but chief among them is the ability that it gives shippers to consolidate freight and save on transport costs.

Generally speaking, the cost of moving shipping containers is based on the number of units being hauled, not their weight. So the fewer containers a shipper can consolidate their cargo into, the less money the shipper has to spend on transport costs.

Typically, when goods are shipped from overseas, loose cargo is floor-loaded into shipping containers and then palletized once it reaches a transloading facility. Floor loading allows a shipper to fit as many goods as possible into one container, which is a priority for overseas shipments

Once a shipment reaches the facility, the goods will likely be sent to several different destinations or stored until needed. It makes more sense to unpack, sort and palletize the goods at that point than to do so prior to the cross-seas voyage. Once palletized, the goods are loaded into a new container and put onto an outgoing truck for final delivery.

Palletizing goods has some important benefits in the overall supply chain, including:

The benefits above make the palletization of products a no-brainer in most situations.

Another advantage that the transloading process gives shippers is more control over their inventory management and more flexibility throughout the supply chain. This is especially helpful in reducing port congestion.

Typically, when a shipment is made without the use of a transloading service, it’s sent directly to the end-user. The destination is chosen well before the goods are shipped, and with no opportunity to redirect the shipment. The shipper is forced to complete the delivery as originally scheduled, regardless of how the market changes while the goods are in transit.

During container transloading, shippers are able to delay the decision and make adjustments to the final destination while the goods are still in transit. Once the goods reach the transloading facility, they will be unloaded, processed, and transferred to new containers. Based on how demand may have changed while the goods were on their way there, the shipper has the opportunity to redirect the goods or consolidate the cargo into shipments to a different store or warehouse.

Looking for a solution to store and ship your products seamlessly? Let R+L Global Logistics be your fulfillment and distribution partner.

While most shippers try to consolidate cargo into as few containers as possible, occasionally you may run into issues when a state or region has a specific weight limit. For example, many states in the U.S. allow specialized trucks to carry 55,000 pounds or more of cargo in a 40-foot container. However, in most of California, you’re only able to carry up to 47,000 pounds.

In some cases, you can get around this issue by using a specialized vehicle and by holding an overweight permit. However, if those options are unavailable, you may need to distribute the cargo across multiple containers at the transload facility to get each container under the weight limit before the delivery can proceed.

When a container is unloaded at a transloading facility, it’s able to be returned much more quickly, avoiding any additional fees. As opposed to intermodal shipping, the transload container never leaves the terminal itself. Instead, its goods are unloaded and transferred to a new container. Similarly, once the container arrives at the facility, it should be pre-cleared for unloading and transport so that it doesn’t overstay its allowed time at the terminal.

Now that you know more about container transloading, let R+L Global Logistics help you get started with your logistics and distribution. We use our vast network of locations and variety of services to get the job done right, no matter your supply chain needs.

Our team is equipped to handle any and all supply chain challenges that you’re facing. Thanks to our strategically located resources and vast knowledge and experience, we can handle all of your logistics needs.

Fill out a hassle-free quote today and our team will get to work on creating a strategy-driven and efficient approach for your supply chain needs.

Looking for a solution to store and ship your products seamlessly? Let R+L Global Logistics be your fulfillment and distribution partner.

RECENT POSTS
Inbound vs Outbound Logistics: Achieve Supply Chain Zen
Understanding your supply chain logistics from start to finish will let you pick up on what helps an...
Benefits of Outsourcing Fulfillment to a 3PL
Are your fulfillment operations overwhelming every other aspect of your business? Try outsourcing fu...
Fulfillment Batching: A Distribution Center Solution
Warehouses everywhere are searching for the best ways to optimize efficiency and get orders processe...
Cross Docking vs Drop Shipping: Easy Ways to Fulfill Orders
Cross docking and drop shipping are two ways to quickly and easily fulfill your customers' orders. F...
Decoupling Inventory: Keep Your Supply Chain Moving
A decoupled inventory allows you to improve efficiency along your supply chain by keeping extra stoc...
Hub & Spoke Logistics: Distribution Models of the Future
Finding the best model for efficient fulfillment and distribution can take some trial and error. Che...
Freight Consolidation Services: A Seriously Savvy Solution
Fulfilling your inventory and delivery needs can be a hassle. Fight the rising costs of freight ship...
Cross Docking Rates: The Cost of Speedy Service
Solving port congestion and overcoming shipping obstacles is now an everyday part of the shipping in...
Discover The Benefits of Cross Docking
Cross docking offers numerous benefits over traditional distribution and warehousing. Don't get caug...
Rejected Freight: A Truckers Worst Fear and How to Solve It
If you get penalized with a rejected freight shipment then don't panic. There are a few ways you can... 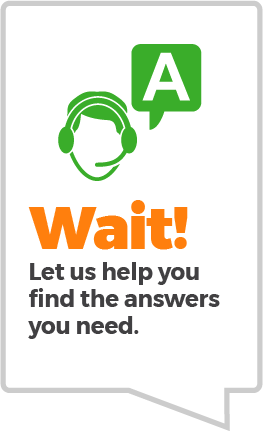 Didn’t Find What You Were Looking For?
We need a bit more information to help you!
Please share some additional details about your fulfillment and distribution needs. Our goal is to be the source of all information you need about warehousing, distribution and fulfillment.
Speak to a Live Expert Now!
Call (866) 989-3082